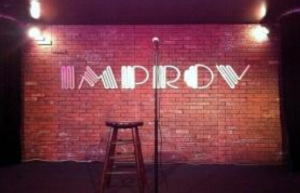 Are you funny–at work?  Let’s begin with your speeches. Many people think they only have to care about humor in the INTRO of their presentation. Not so fast.  Saturday Night Live comedian, Second City Improv alum and White House speechwriter Jon Lovett cautions us to take humor seriously at work.

Once as a speechwriter, Lovett was riding with astronaut Buzz Aldrin and Secret Service Agents.  Nervous, he tried to make a joke. It bombed. You know those dead silences from hell with all angry eyes are on you?  Finally the astronaut snipped at the comedian-speechwriter, “Was that a joke?”  When Lovett said yes, everyone exhaled.

A bad joke is an alarm bell that declares, ‘This jerk is not part of my group,’ the Saturday Night Live comedian says. When humor works in business, it says we get each other in ways that laundry lists of policies never can. Something funny bonds us with shared context. Humor cuts through b.s.  So having radar about what’s funny at work earns or loses respect.

In doubt whether to tell a joke Vs. make a wry observation?  Let Seinfeld-like observations be your M.O. Wry insights on human nature, abuse of power, competitors, etc. are a better bet than risking a formal joke–that bombs.

Once I was hired to speak at large biotech firm. I arrived to find the campus evacuated, all 44 buildings. Every one–head honchos to interns–were stuck on the lawns waiting. Turns out that a SALAMI FACTORY nearby had a tiny fire, pushing smoke out over high-priced corporate real estate.  As I spoke on campus later that day, I whispered in a mock conspirator tone, “How humbling to think that you guys–credited with the birth of the biotech industry–were felled by a salami this morning.” People laughed. It wasn’t ‘Sat. Nite Live’ material but it was uber-topical. Bold. It spoke to our common vanity and humanity. It was just funny enough for a business setting.

Forget hunting for that illusive “great opening joke.” Instead braid humor through your presentation; in The Open and in anecdotes. Here are 7 Tips:

Weigh in. When it comes to our careers, what kind of humor works at work?

Marianne Fleischer is a speechwriter, speech coach, strategist and writer-producer in San Francisco. She consults by the hour, through her ‘Cool Under Fire’ corporate workshops or by retainer.